The Cross and our Witness Through a Calling – Maundy Thursday Devotion

By Kathleen SimleyMarch 27, 2018News, Worship and Pray
No Comments 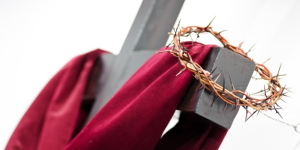 I Peter 2:9-10:  But you are a chosen race, a royal priesthood, a holy nation, God’s own people, in order that you may proclaim the mighty acts of him who called you out of darkness into his marvelous light.  Once you were not a people, but now you are God’s people; once you had not received mercy, but now you have received mercy.

“Grace be unto you and peace through God the Father and our Lord Jesus Christ.  Amen”

Can you imagine receiving a letter telling you that you and your spouse have been chosen to receive a ten-day all-expense paid trip to Hawaii? All you have to do is call the travel agency that sent the letter and set a time to go. In other words, you are asked to believe, and really want to believe, something that by all logic is too good to be true. What a contrast between what had been and what will be—if only you can believe the gift! Before you haven’t been able to put together enough money to travel to the next state and camp, now you’re offered the privilege of traveling to Hawaii and staying in a luxury hotel. There is a certain risk in believing the gift offered in the letter—if someone is playing a trick, you’ll end up making a fool of yourself.  Neither can you afford to ignore the offer. To do that would be to make another kind of fool of yourself. If you’re going to receive what is offered, you have to place a certain amount of faith in the genuineness of the letter you’ve received and in the integrity of the one who sent it, a person you’ve never met. That’s not easy to do.

Now come with me from your living room to the Upper Room in Jerusalem the first Maundy Thursday. The apostles have gathered with Jesus to celebrate the Passover. In the midst of lessons on humility and love, predictions of his going away, and promises about the many rooms in his Father’s house, Jesus takes bread, gives thanks, breaks it and gives it to the disciples, saying, “Take and eat; this is my body, given for you.” Giving them wine he says, “This cup is the new covenant in my blood, shed for you and for all people for the forgiveness of sins.”

Imagine yourself as one of the apostles around the table that night. Again, you are asked to believe something that to all rational thought is too good to be true. After all, it’s only a bite of unleavened bread and a sip of wine. How can such everyday things be the body and blood of your Lord and Master? How can they be the means by which all believers will receive forgiveness of sins? As an apostle, you know Jesus too well to suspect he’s playing a trick on you.  But you also know he’s been under a terrible strain lately. Can the strain have caused some kind of delusion within him?

Obviously, the apostles are called to believe, to be willing participants in a gift only God can give. And each is required to decide how much he is willing to risk in accepting what Jesus is promising.  It’s not the first time they had to make such a decision. Nor will it be the last time. It began when Jesus said, “Come, follow me.” And it will continue when he stands before them in the Upper Room on Easter evening and says, “Peace be with you.” Because of the promise, “and lo, I am with you always, to the close of the age,” they will be making such decisions the rest of their lives. In the process Jesus offers a challenge to accept what he alone can offer them.  And that, too, often seems a gift beyond belief.

Today’s lesson is one of my favorite passages of Scripture. How beautifully it describes our calling as Christians. “But you are a chosen race, a royal priesthood, a holy nation, God’s own people, that you may declare the wonderful deeds of him who called you out of darkness into his marvelous light. Once you were no people, but now you are God’s people; once you had not received mercy, but now you have received mercy.”

Talk about an unbelievable gift. That’s a before and after story that tops a Hawaiian vacation by a mile. That gift was given to us in Holy Baptism. By water and the Word God declared you and me to be God’s daughters and sons. I was baptized as an infant, which underlines how little I deserved that gift. I didn’t walk up to the font and tell Pastor Hoeferer I wanted to be baptized.  I didn’t promise to fulfill my baptismal vows. I did nothing to deserve to be God’s child and neither did you. Our baptisms were like letters announcing a gift that’s almost beyond belief.

“Once you were no people, but now you are God’s people; . . .” How true that is. There are so many things that can keep us from being a people. Some of the things that separate us are obvious sins like pride, jealousy, and indifference. Others are a matter of who we are as persons. Because of a variety of educational, financial, and social backgrounds, we may feel we have nothing in common.

But through the power of the cross, God calls us not simply to be a people, individuals gathered together, but to be God’s people, individuals gathered together around God and God’s love. As God’s people, we are declared to be “a chosen race, a royal priesthood, a holy nation.” What a transformation! From nothing to all of that!

There is one little catch, but it’s a catch that’s not really a burden. For Peter writes, “that you may declare the wonderful deeds of him who called you out of darkness into his marvelous light.” Can you imagine risking belief in the promise of the letter I described earlier, finding the trip to Hawaii as enjoyable as you had hoped, returning home, and never saying a word about the trip or how it came to be yours? Or saying to your spouse, “Well, I suppose we have to tell our friends about our trip”? Instead, every person you can possibly corner will hear about the marvelous things that have happened to you. That’s what God asks of us in return for his call and promise of love.

“The cross and our witness through our calling.” God continues to call you and me through the cross to enjoy the greatest blessings possible, blessings beyond anything we could ever deserve or repay. We are called to the blessing of being a child of God, members of God’s people. That’s our vocation. We are never only a farmer, a housewife, a secretary, a janitor, or a pastor. We are always a child of God who is a farmer, a housewife, a secretary, a janitor, or a pastor. As “a chosen race, a royal priesthood, a holy nation, God’s own people,” we can never doubt our worth to God. God is always helping us become more and more what God has called us to be. Through every prayer, every act of worship or meditation, every sharing in the Sacraments God strengthens us to “declare the wonderful deeds of him who called (us) out of darkness into his marvelous light.”

May God grant you and me the wisdom and the courage to accept and live out the gift given us by God’s love on the cross.