The Story Behind “The Cross and Our Witness” Lenten Dramas

By Kathleen SimleyApril 7, 2018News, Worship and Pray
No Comments 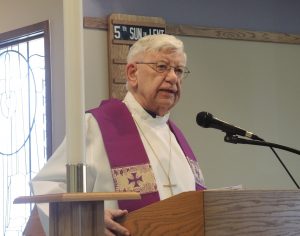 In the mid-1970’s I was looking for something new to use to tell the faith story during Lent. When I found a book of Lenten chancel dramas and meditations, I asked the youth group at First Lutheran, York, to be actors and they were willing. The dramas were well received so when the same author published another series a few years later, we did those also. I waited for another volume, but none came.

In 1987 the Nebraska Synod sent pastors a copy of Lenten sermon resources, One in Mission:  Nebraska, and I decided to try to write chancel dramas and meditations on the texts and themes suggested in that booklet. I again called on our youth group to be the cast members and we presented the dramas during Lent, 1987. After Easter one of our members suggested I submit the material for publication.

In July 1987, I sent my manuscript to Augsburg Publishing in Minneapolis. A few months later I received word that it was accepted for publication. Unfamiliar with the publishing process I volunteered to drive to Minneapolis to meet with the editor of my book at his earliest convenience. I was informed I would be notified when publication was scheduled and editorial work would be handled by mail. A publication agreement was signed a year later and the editor began sending suggestions for revisions. I don’t remember how many copies of the manuscript were sent back and forth, but I’m pretty sure I spent more time revising than I did writing the original. I thanked God often for my computer as I can only imagine what a problem carbon copies would have been.

I received the first copy of The Cross and Our Witness in November 1990. What a thrill! I don’t know if I took Shirley to Chances ‘R’ that night, but if I didn’t, I should have.

I have a fond memory of the first production of the dramas.  I almost broke out laughing when I heard Jim, the character in a wheelchair in the first drama, who was only able to see darkness and light, tell the seminary student visiting him,    “I read in the Newsletter about your coming to work at our church.” I knew I didn’t have miraculous powers so I changed that. “The playwright giveth and the playwright taketh away.” (Cf. Job 1:21)

I have used these dramas in two congregations, but this is the first time I wasn’t in charge of directing, setting the stage, etc. so having the meditations as my only responsibility was a breeze. I have no idea how many other congregations used them. Books were sold, but I don’t know how they were used (they are a little small for doorstops). In case you’re wondering, I did receive royalties, but my book never reached the New York Times Bestseller List or Oprah’s Book Club so I was not tempted to leave pastoral ministry to write for a living.

Picking a favorite chancel drama is like picking a favorite child. After spending so many hours with each of them, they all become favorites. Each has a message for faith in daily life. However, I hope “You Have Been Chosen” is a special reminder of the joy, excitement and risk of the gift of grace we have been given and invited to share.

I have many people to thank for The Cross and Our Witness. I gave one of the first copies to my mother with the note, “Mom, Thank you for all the wonderful stories you told us children. Maybe story-telling has rubbed off on me. Love, Harlan.” Thanks to those first cast members (including our children) and to our 2018 cast members for being willing to give acting in the church a try. Thanks to Pastor Dan and Pastor Justin for inviting me to share in these Lenten services. I obviously couldn’t have done it without any of you.