By Kathleen SimleyMay 21, 2020May 26th, 2020News
No Comments
First Lutheran member, Dan Howard, was identified by the Omaha World-Herald as Nebraska’s most highly decorated artist having been the recipient of 100 prizes, awards and honors during a 50-year career as a professional artist and art educator. Born, raised and educated in Iowa, Howard received both B.A. and M.F.A. degrees in art from the University of Iowa. As an educator, he was a faculty member and administrator at three state universities: Arkansas State, Kansas State and for 22 years at the University of Nebraska-Lincoln, serving ten years as department chair from 1974-1983.
Dan has exhibited extensively throughout the United States, with artwork represented in well over 350 competitions and invitational showcases; major art galleries in at least twelve cities carried his work over a period of several years, including a prominent SOHO gallery in New York City during the decade of the 1990s.            Further, more than  600 public, corporate and private art collections in this country and abroad have one or more Howard works among their acquisitions. In the competitive arena, he was recipient of the top awards in the three major national painting competitions – the Chautauqua in New York, Butler in Ohio, and Society of Four Arts in Florida.
The artist has placed his work in the national collections of such corporate entities as Hallmark Cards, West Law Publishing, United Airlines, American Airlines, Quest (Century Link) Center, Minnesota Mining & Manufacturing (3M), Pepsi Cola, Chicago Steel Corporation, Riceland Foods, Sheraton Hotels, Holiday Inns, Coopers & Lybrand, Con Agra, TD Ameritrade, and numerous banking and financial/insurance institutions. Locally, Assurity Life Insurance, Farmers Mutual Insurance, Great Western Bank and Lied Center for Performing Arts prominently feature Howard’s artwork in their respective buildings.
As to public art collections, Howard’s art is held by many institutions, including the Smithsonian American Art Museum in Washington DC; Lowe Art Museum, Miami, FL; The Parthenon Museum, Nashville, TN; Arkansas Arts Center, Little Rock, AR; Sioux City Art Museum, IA; Fort Dodge Art Museum, IA; Joslyn Art Museum, Omaha, NE; Museum of Nebraska Art, Kearney; Sheldon Museum of Art, Lincoln, NE and others.
More than 600 public, corporate and private art collections in the U.S. and abroad have one or more Howard works among their acquisitions, such as United Airlines, American Airlines, Sheraton Hotels, Holiday Inns and locally at the Lied Center for Performing Arts, Assurity Life Insurance and Great Western Bank.
Dan can now add First Lutheran Church in Lincoln to the list of local institutions showcasing his art. He donated one of his works, “After Leonardo’s Magnum”, an oil on canvas painting to First Lutheran. It is a 21st interpretation of Leonardo’s Last Supper. The beautiful painting is showcased in the Commons area.
We are so very, very grateful for Dan’s gift to our church and can’t wait for you to admire and appreciate it in person when we can safely re-enter our building. 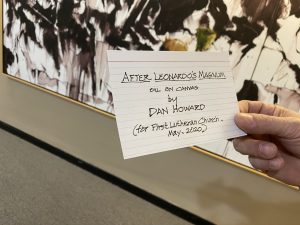