English language conversation groups were held on April 8, 15 and 22 from 9:30-10:30 am, led by Barry and Vicki Graham, Shari Sorenson and Kari Eller. In mid-April, English learners requested that planners consider a tutoring approach. A shift was made and eager tutors were easily recruited. Tutor orientation was offered on April 22. On Sunday, April 29, learning partners gathered before beginning their sessions together, offering prayers in Nuer and English and thanking God for this rich opportunity.

Volunteer tutors are still needed  on Sundays from 9:30-10:30 am or to serve as substitutes. Have questions or are interested? Contact Pastor Justin at pastorjustin@flclincoln.org or Barb Johnson Frank at bjohnsonfrank@gmail.com. 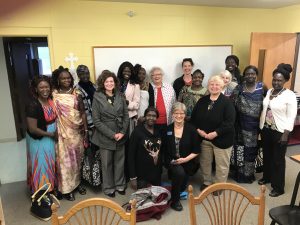