Weekly Devotion: The Truth of the Matter

By Kathleen SimleyFebruary 23, 2021News, Worship and Pray
No Comments
C.S. Lewis wrote, “You never know how much you really believe anything until its truth or falsehood becomes a matter of life and death to you.” This lesson took on even greater depth and meaning for me when I turned 16.
I had a newly minted driver’s license and was loving the freedom it brought me.
One of the most important safety lessons I learned in Driver’s Education focused on a seat belt: I was more likely to survive a car accident if the belt was properly fastened. I’m glad I took this information as truth.
After having my license for only a few months, I was at a stoplight when I heard brakes screeching. I glanced in my rearview mirror and saw a car headed straight for me. There was nothing I could do to avoid the collision and braced for the impact.
Then, a loud crash and my screams. A car going at least 45 mph had slammed into me.
Glass shattered all around. I was terrified, so I quickly put the car in park, unbuckled and got out. Thankfully, nothing was broken or bleeding. Praise God, both the other driver and I were relatively unharmed. With my first car totaled, I was grateful to walk away with only whiplash.
The Gospel of Luke tells us that two others were also with Jesus and hung on crosses on either side of him. One of them asked of Jesus, “remember me when you come into your kingdom.” And Jesus replied with words that seem unbelievable: “Truly I tell you, today you will be with me in Paradise.”
Maybe Jesus knew those words would sound unbelievable. Maybe that’s why he added “truly I tell you” to the beginning of his promise. He had to say something to convince the man at his side that despite all their pain, suffering and sadness there was still good reason to hope. The “truth” of the matter was they would be together in something better – something beyond where they currently were. 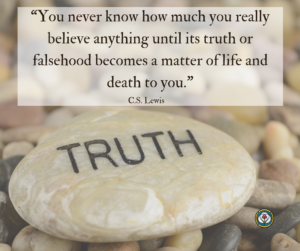 That life or death experience early in my driving career taught me to value the fact — the truth — that wearing a seat belt increases safety and saves lives. I had experienced the truth of seat belts for myself and I was convinced!
Perhaps you’ve experienced this as well — that truth in the end is immovable and unavoidable. Often, we come to terms with the truth when we have no other choice. The truth is like light. It illuminates and exposes what is real. Truth offers hope.
What are some truths you have learned in your life that have given you hope when you most needed it?
What are some truths you speak to other people when they are struggling?
“Seven Last Words” is our Lenten theme and they are the sayings of Jesus from the cross as recorded in the Gospel narratives. This week’s word is, “Truth.” Join us in worship on Wednesday at noon or 6:30 pm (or watch our livestream on Facebook at noon) when one of our First Lutheran members shares how “truth” was revealed to him in his lif