Weekly Devotion: We Are the Church

By Kathleen SimleyJanuary 26, 2021News, Worship and Pray
No Comments

“Therefore, as we have opportunity, let us do good to all people, especially to those who belong to the family of believers.” Galatians 6:10 (NIV) 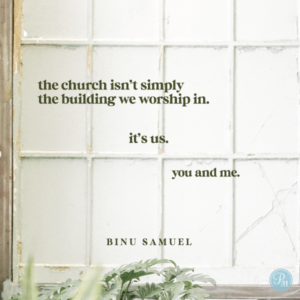 We walked out of the Sanctuary and into our church’s main lobby. I thought my husband was headed toward our usual corner where we typically chat with a few friends after service. But my husband veered off to a different side of the lobby. When I spotted him, I noticed his arm was around the shoulder of a fellow church attendee. The two appeared engrossed in a deep conversation.

As we drove home, I couldn’t help but ask what that conversation was all about.

My husband filled me in: “During the service, I noticed that man’s socks. I noticed his socks because of the holes he had in his shoes. I felt a strong nudge in my heart to buy the man a pair of shoes … so I was asking the man his shoe size.”

We’ve attended this church for over 20 years. It’s a fairly large congregation with multiple servicetimes, so meeting new people was nothing new for my husband. But walking up to someone he has never spoken to before and asking him his shoe size? Now that was a first.

I continued my questioning: “Oh, wow … was he surprised? Was he insulted? Does he simply like his old shoes?”

My husband replied, “No, he wasn’t insulted at all. His eyes filled up, and his chin quivered. He actually seemed moved. I gave him my number and asked him to call me. I told him I’d like to meet up with him at the mall.”

Two days later, my husband and the man met. There, in the food court, this man shared his story. A few poor choices had led him to where he was. He was thankful for a stable job, but he still had a long way to go.

He told my husband, “I don’t do well with handouts. I accepted your offer because I knew it was God. I have a funeral to attend later this week. This past Sunday morning when you approached me, I had just looked through my closet to see if I had a pair of shoes decent enough to wear to the funeral. I didn’t. So I asked God that morning if He could somehow provide a pair of shoes. When you asked my shoe size, I knew God had heard my prayer. I was overwhelmed by God.”

After purchasing the shoes, my husband asked his new friend if there was anything else he needed. “No, thank you,” his friend replied. “I’m good. I just asked God for shoes.”

My pastor reminds us quite often that the church isn’t simply the building we worship in. It’s us. You and me. We are the church. We are the body of Christ. His hands. His feet. When there is a need, if we can meet it, we meet it.

Maybe you’ve felt that tug to encourage a brother or sister in need, but you hesitated because you were unsure how they would respond. I’d like to challenge us today to push through the awkwardness and prayerfully act upon God’s prompting.

Or perhaps you find yourself alone and in need. Maybe your choices or the choices of others have led you to this place. It doesn’t matter. God still hears you. Even those quiet, desperate prayers you pray alone in your closet. God hears.

Heavenly Father, thank You for loving me as though I were Your only child. And yet I am not — I am part of Your much larger family. Help me to love others as You love them. Open my eyes and heart to see the needs around me. In Jesus’ Name, Amen.

Written by Binu Samuel and taken from Proverbs 31 Ministries